Your cart is currently empty.

Reprint the review of the techjioblog

There are many affordable custom keyboard options out there these days. But one barebones unit recently caught my eye because of some unique features that it offered. And that is the GoPolar GG86 TKL Barebones keyboard. If you’ve never heard of GoPolar, you may have come across their Dragon and Vermillion Bird switches. The GoPolar GG86 TKL Barebones keyboard retails for S$148, which you can buy them through Mecha Store.

This is probably one of the most unique box I have seen so far for a keyboard. It is as though I am unboxing some ancient Chinese heirloom, but instead what you get is the following:

I believe I am missing one set of 2u screw-in stabs since it doesn’t not make sense to provide a total of 4 sets only.

The GoPolar GG86 won’t blow you away with its build quality since the case is built out of ABS plastic. There are four colours to choose from – (1) white, (2) black, (3) blue, and (4) pink. The unit I have is the white colour variant. The plastic used is rather thin and flexible, and because of that it is slightly translucent as well. As such, the overall weight of the keyboard comes in just under a kilogram, at 810 grams.

There are rubber kick-out feet available. If you engage them, then the typing angle will go from 4.5° to 5.5°. GoPolar GG86 uses USB-C connection and the port is located on the left side of the board. As the plastic has some translucency, the RGB lighting will diffuse throughout the case which I think some folks will dig it.

As aforementioned, I think a set of 2u stabs where left out of my unit. I did still test out the provided stabilizers. The stabs out of the box are unlubed, so I lubed the housings with Krytox 205g0 and xht-bdz for the wires. The stabilizers are pretty decent, and feels similar to the Gateron screw-in stabilizers I used on the Keychron Q1.

The GoPolar GG86 can only support screw-in stabilizers. You cannot use plate mounted ones as the plate cannot hold them. Another thing to note is that if you can’t use other brands screw-in stabilizers for the enter and right shift due to the design of the PCB causing the tolerance between both to be very tight. Only the included stock stabs seem to be able to fit.

For my complete build, I opted to use OwlStabs V2 screw-in stabilizers for everything else except for the enter and right shift.

The top and bottom case of the GoPolar GG86 is not screwed together, instead they are clipped together with the latches on both sides of the case. Closing the case is easy but opening it is rather difficult. GoPolar does provide a prying tool for you to loosen the latches. I was unfortunately a little rash with prying open one side of the latch points, and ended up scuffing the bottom latch. Thankfully, the case still closes fine, but it does mean that you should be careful when opening up the keyboard.

In fact, I’d recommend using an unwanted plastic card (eg. Starbucks card) to slowly pry open the case starting from the thicker top, instead of using the metal prying tool as it can scratch the plastic.

Now that we have the board open, let’s talk about how the internals. There is a 12mm thick silicon dampener laid over the bottom case, which you would place the PCB on. Between the PCB and plate is a 5mm thick silicon which encases the entire perimeter of the FR4 plate. This implementation of silicon between the PCB and plate has led some to call it a ‘silicon gasket mount’.

Personally, I wouldn’t categorize this as a gasket mount since both the plate and PCB is technically sandwiched by two silicon layers. It is more of a sandwich mount to me than a gasket mount. Perhaps if the silicon used was much softer, then it could offer similar flex from a gasket mount. But if my full build, there wasn’t much flex left after closing the cases, but definitely not as stiff as tray mounted boards.

When it comes to acoustics, the GoPolar GG86 produces a largely deeper muted sound, likely due to the immense use of silicon in the case. The main acoustic profile you will likely hear is from the upstroke of your switches. In my build of tangerines 62g switches, the higher pitch characteristics is dampened out giving it a more muted sound. If you have a preference for a lower frequency sound profile, then the GoPolar GG86 may be something you wouldn’t mind

You can refer to the video below for a general sound test (recorded with Boya BY-MM1 microphone, normalized in Audacity). No idea why the spacebar had such high pitched reverb in the recording but in real life it sounded more low pitched and hollow.

As mentioned in the introduction, the GoPolar GG86 has some unique features that separate itself from being a typical TKL keyboard.

You have the option to convert the GoPolar GG86 into a WKL layout by using the silicon blockers that came in the box. It is an easy way out to create a WKL look but it may not as aesthetically pleasing since the blockers are of a different shade and material from the ABS plastic top case.

The PCB of the GoPolar GG86 is incredibly versatile. It is designed in a way that you can easily switch between an ANSI and ISO layout. Furthermore, it even has support for split left/right shift support.

I’m not sure if this is due to the choice of offering WKL layout, but the GoPolar GG86 can only support a 7u spacebar. You won’t be able to use the more common 6.25u spacebar. This shouldn’t be an issue if you have purchase GMK or ePBT base kits as they always include a 7u spacebar. But if you’re planning to use keycap sets from AKKO or some clones, the base kit does not usually include a 7u spacebar.

This also means if you plan to use other stabilizers, you need a 7u wire as well.

VIA support is important given that you have the flexibility of using any layout in your build since you can do key re-mappings easily. Having full QMK and VIA support really adds to the functionality of the GoPolar GG86. As both QMK and VIA being open source, it opens up more shortcuts, backlight effects, as more people use it. Having QMK/VIA support is GoPolar GG86‘s standout feature since not many keyboards at the S$149 price point offers this.

If your VIA software does not recognize the GoPolar GG86 when plugged in, you can simply drag the GG86.json file into the ‘Design’ tab of the VIA software.

And yes, the black thing above the arrow keys is an OLED panel that displays your active layer, caps lock, num lock, scroll lock indicator, and also shows the last 20 key-presses. Apart from that, it doesn’t have other useful features for productivity and is currently unable to be configured to do anything else. But who knows – in the future GoPolar may add some functionality to the OLED panel.

If you value QMK/VIA support and flexibility of layout choices, then the GoPolar GG86 is a great option for a hot-swappable TKL keyboard. In fact, there aren’t many keyboards out there with QMK/VIA support at this price point of S$149. If you can look past the use of ABS plastic and the need for a 7u spacebar, the GoPolar GG86 is one of the exciting TKL options available in the market today. 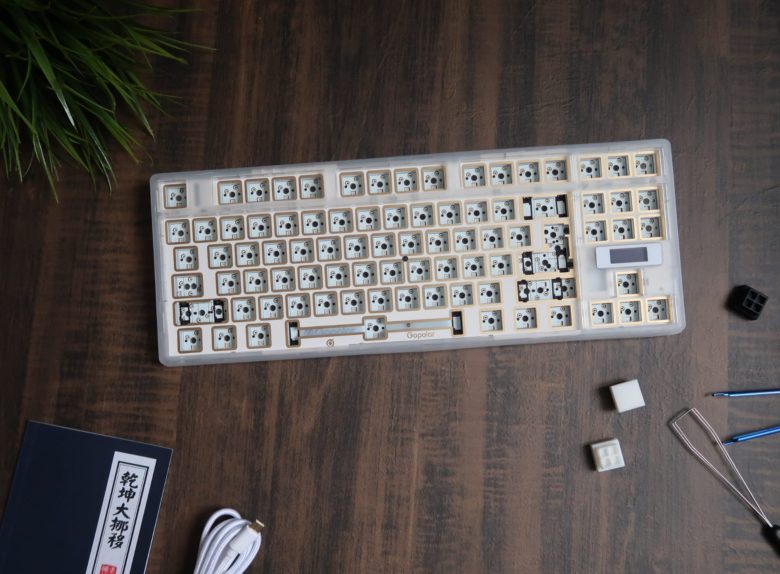 The GoPolar GG86 is a great starter TKL if you're looking for something affordable and has QMK/VIA support. It has great versatility with support for ISO and split shift as well.
←  Back to Gopolar's project
Share Tweet Pin it